Be ready for Black Friday! Four Real Examples Of Our Promotion – BYYD

Be ready for Black Friday! Four Real Examples Of Our Promotion 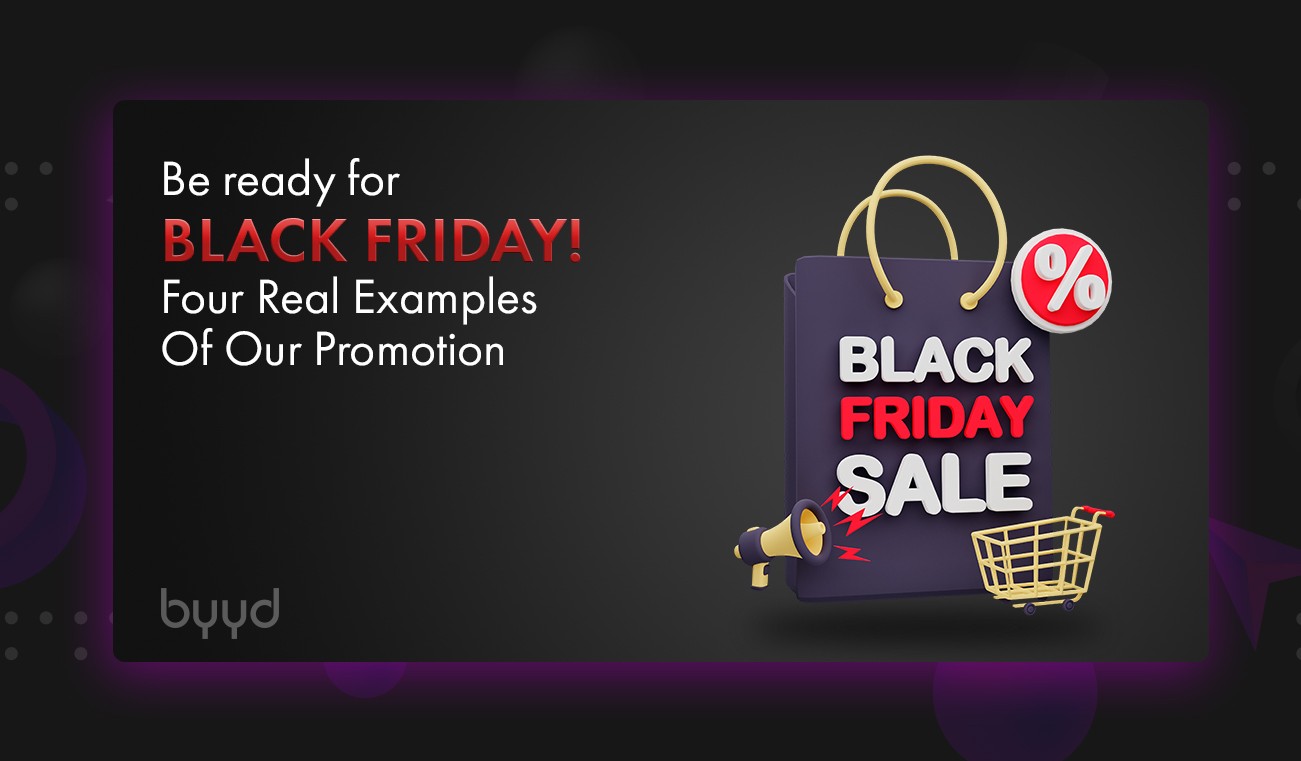 We decided to share examples of the launch of the Black Friday promotion that our BYYD team has implemented in different seasons. These examples will show you how launching mobile ad campaigns can help increase awareness and attract more interested users. Let’s start!

1. Announcement of the sale “Black Friday” in the shopping mall “Vesna” (Moscow)

Our team’s tasks within the framework of this advertising campaign were to announce the campaign and attract targeted traffic to the client’s landing page.

We developed ad creatives in Fullscreen format banners, set up targeting socio-demographic indicators and interests: men and women aged 25 years and older who are interested in the categories of fashion and style and entertainment (cultural recreation, events, etc.). We also set up SuperGeo targeting the Vesna shopping and entertainment center (Moscow).

As part of campaign optimization, we focused on achieving KPIs for post-click indicators, choosing the most effective placement sites and CTR.

As a result, we managed to overfulfill the plan for clicks by 1% and reach more than 250,000 users. GA behavioral scores were 6,766 sessions and 1 minute + 1 second of session time.

2. Announcement of the Black Friday promotion in the Oz Mall (Krasnodar and nearby cities)

As a part of this advertising campaign, our team faced the task of announcing the upcoming Black Friday Sale event.

What did we do? We developed Fullscreen banners, launched targeting by interests and socio-demographic indicators (men and women from 25 to 45 years old), also set up geotargeting to Krasnodar and the nearest settlements.

During the advertising campaign, managers selected sites that showed high post-click rates and CTR. We carried out optimization according to our platform data related to GA. As a result, we managed to overfulfill the plan for impressions by 5% and reach an average session duration of 2 minutes and 24 seconds.

3. Announcement of Black Friday in the “Afimall City” (Moscow), promotion of the drawings of prizes, and themed “Afishow”

As a part of this advertising campaign, we announced several events at once related to each other by one central theme Black Friday.

Our team developed a grid of multimedia animated banners (6 banners and 6 Fullscreen banners) to achieve the goals, which informed the potential audience about the sale, show, and draw in the mall.

In addition, we developed a mobile landing page so that it is convenient for users to receive all information about promotions and shows with dates, participation rules, promotions, contacts, and the ability to download Afimall City applications.

To reach the target audience, we set up precise SuperGeo targeting. We showed the banners to users who were within a radius of 1 km from the mall.

Analytics and optimization were also massive. We carried out the advertising campaign in the CPS model. To calculate sessions and metrics for a mobile landing page, we installed GA and set goals for fixing conversions for all clickable elements. Using statistics from GA, managers tracked user behavior and optimized the campaign following the data received. The mobile manager also optimized placement sites on the platform. The least effective ones were disabled, and we tracked working creatives and sources.

As a result, we managed to overfulfill the planned number of sessions by 14% and achieve a high session duration. (2 minutes instead of the planned 1 minute and 30 seconds.)

4. Announcement of the Black Friday promotion in the Metropolis shopping center (Moscow)

The task of our team was to announce the campaign and attract interested users to the site. So, we developed Fullscreen banners and combined several targetings such as socio-demographic facts, interests, and geography. SuperGeo targeting made it possible to set up ad within a radius of 7 km from the Voykovskaya metro station next to the shopping mall location.

As a part of the optimization, we selected sites that showed the best KPIs. As a result, we managed to overfulfill the plan by 100% impressions and reach 100,000 unique users.

Do you want to attract your potential customers on Black Friday or make your promotion known to as many people as possible? Contact us!

Be ready for Black Friday! Four Real Examples Of Our Promotion

How to attract the user’s attention? 7 Rich Media Advertising Examples