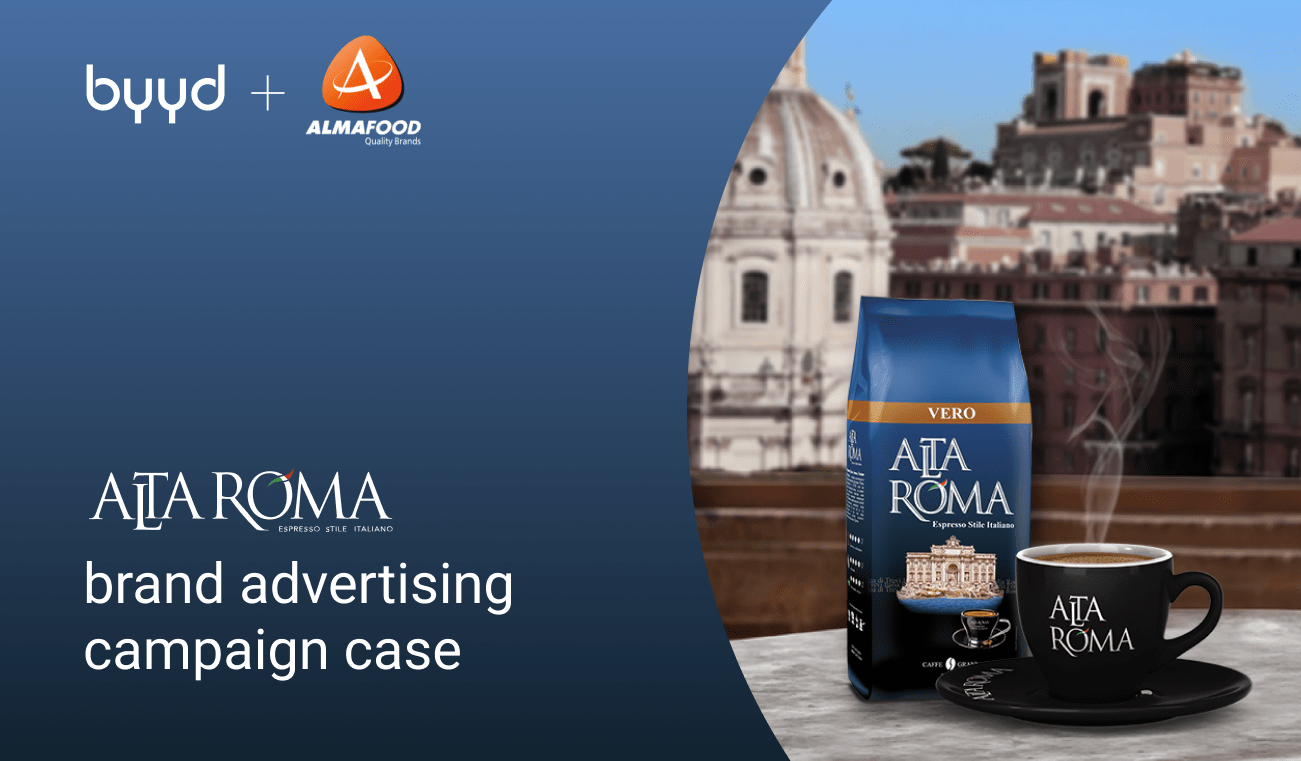 BYYD ran an advertising campaign for the Alta Roma brand to support In-Out in the networks.

The advertising target was the “blue” retail line of the Alta Roma — an Italian coffee brand that moved the roasting to Russia. Initially, the brand included a professional line of freshly roasted and ground coffee for HoReCa.

The company later introduced new SKUs to the market for retail sales. The brand, widely known among professionals, was little known by the consumer. It was necessary to reach out to the audience living in the direct vicinity of the distribution points.

We chose the “supergeo” mechanic for “Magnit” stores in cities with over one million population to reach the relevant audience. The BYYD platform can set an unlimited number of points for displaying advertisements with a radius of 800 meters.

The successful result of the advertising campaign was an increase in awareness among the target audience based on the results of brand lift and support for SKU sales during the In-Out period.

Development of the promotion strategy

To reach the target audience, in addition to targeting by social parameters (M / F, 22-40 years old), we proposed to use targeting by the following interest groups.

The media plan included the RichMedia creative format with a CPC (cost per click) payment model, optimal for attracting the target audience to the landing page.

The idea of ​​using the Rich-Media format was substantiated by the possibility of effective interaction with the audience even when showing the creative. In this communication, a unique role was assigned to the teaser, which was supposed to “hook on” the consumer and ensure the maximum transitions to the landing page. Within the framework of communication, in addition to the tasks of stimulating the sales, there was the task of building knowledge about the brand, broadcasting its commitment to Italy and the Dolce Vita philosophy.

At the first meeting, colleagues outlined the possibility of free development of advertising creatives and a landing page for advertising campaigns, which we took advantage of. The creatives were pleasantly surprising. The guys used situational marketing and created a spectacular creative teaser. In just five working days, we had an interesting Rich-Media-creative and a landing page ready ”.

Vladimir Zayarnyuk, Mobile Manager BYYD: “On my side, I would like to explain why the team always offers production as a bonus. The fact is that the success of any advertising campaign depends largely on the quality of the creatives and the landing page. In mobile traffic, page load speed is fundamental, without which the content is absolutely irrelevant”.

As a result of the advertising campaign, it was possible to reach more than 385,000 target users and obtain excellent behavioural indicators.

Colleagues from digital agencies will confirm that this percentage is a strong argument for the quality of the site and the absence of the “thumb effect” inherent in mobile inventory. So, the rate of reaching shows whether the CTR was not high due to an accidental click on an advertising banner in a place unexpected for the user.

The BYYD team solves this issue by constantly monitoring sites, automatically blocking deviations from the required CR percentage in visits and using the WhiteList of quality sites.

It is worth considering that the landing page itself, its loading speed, and the correct installation of Google Analytics or Yandex.Metrica code also plays an essential role.

Another critical part of most advertising activities is Brand Lift.

The BYYD team conducts it regardless of the timing of the leading advertising campaign since Platform Device ID is collected for all impressions. It makes it easy to benchmark users who have interacted with the ad and those who haven’t seen it.

Statistics among users who did not see the Alta Roma banner during the primary advertising campaign (new audience):

Question: “Do you know the brand?”

Statistics among users who saw the banner during the primary advertising campaign (retargeting):

Question: “Do you know the brand?”

As a result, the BYYD team received answers to two crucial questions.

Anna Abishina, Head of Marketing Almafood: “We are pleased with the results of the advertising campaign and the approach to the work of the BYYD team. Separately, I would like to emphasise the speed of work of all departments, an individual approach to the development of creatives and a landing page from the production side, prompt changes during the advertising campaign and continuous optimisation during the campaign.

The result of the communication was a pleasant surprise – the product was highly recovered from the shelf, and the retailer decided to list this SKU in a permanent assortment.

Separately, it is worth noting the highest level of service, instant response to client requests and high professionalism of the team. At the moment, the development of a strategy for a new advertising campaign is underway”.

Timofey Kochubinsky, Account Executive BYYD: “Separately, I would like to thank Anna for her trust and assistance in the implementation of the project. After all, the critical factor in achieving good results is assistance from the customer, expressed in the provision of a high-quality brief, access to analytics and quick feedback on suggestions, edits to creatives and changes in the advertising campaign during optimization”.

Which ad format for mobile apps should you choose?

How to provide brand safety in the mobile programmatic campaign?

What metrics do we measure in mobile advertising campaigns?