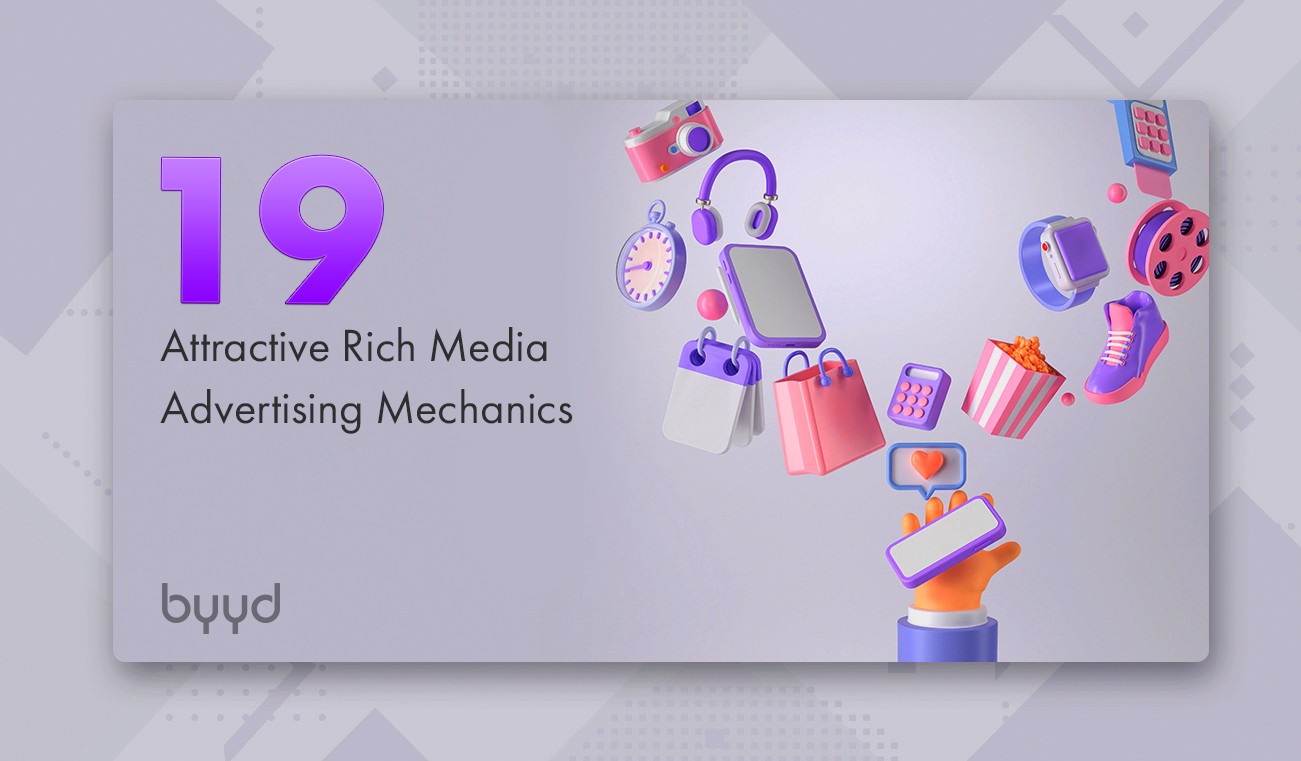 Rich Media banners are an interactive format at the interface between a regular banner and a video. With the help of Rich Media, you can provide the user with the necessary information and involve him in advertising and motivate him to interact. This format looks unusual, is memorable, and encourages the user to share his impressions with others.

An animated picture attracts more attention than a static banner. Thus, in a few seconds, you can convey the benefits and unique features of the product, show which problems of the target audience solve the product or company. For example, as we did in this ad creative for Colgate with the short question “Are you embarrassed to smile?” and the person, who covers her mouth with her hand, creates the effect of approaching the user. Such a message prepares the user for further demonstration of the “whitening toothpaste” product.

Motivating a user to interact with an ad is not easy and even more complicated if you choose a static banner ad creative or a popular video format. The Interaction Rich Media mechanic can solve this problem. The user is involved in the process, and he is more likely to click on the CTA and go to the client’s website. For example, as in this ad creative for Milka. The interaction occurs twice: the user may click on the chocolate bar and choose his taste.

After using the advertised service in a few seconds, demonstration of results is possible using the Before / After mechanic. Such mechanics will also be relevant for services in the beauty industry, just like here.

But it was not limited to this case. In the creative for Raffaello, we also applied the kind of mechanic on which the user could turn an ordinary box of chocolates into a box from a limited collection of raspberry of the brand Rafaello.

Wipe the screen; such mechanics work too! You can use it in different ways. First, “hide” the creative and invite the user to see it by wiping the screen. Sometimes it very well coincides with the theme of the product. For example, as a part of the promotion of Midea refrigerators, we made a creative with a “fogged” screen.

Book animation allows you to tell about several products or services in one creative. For example, here, we developed a creative for a travel agency, where you can scroll through travel directions on book pages. Each “page” has a CTA button so that the user can immediately go to the target action.

This mechanic also helps showcase different product properties or different product types in a single creative. We can combine slider with other mechanics such as animation and interaction. For example, in this ad creative first, the user is prompted to select their favorite cookie flavor and then scroll through the descriptions of others.

The user can choose what is more attractive to him within the framework of one advertisement by using the menu. This mechanic is also often combined with others by the same slider.

For example, here, the user is asked to select a direction on the map of Thailand and then read more about the distinctive features of the region.

The implementation of this mechanic depends on the topic of the product. For example, in a New Year advertising creative for Nutella, chose the theme of DIY gifts. It randomly generated a display of different ideas that the customer can implement by using the product.

Gamification is one of the most popular mechanics of user engagement in the advertising process. Everyone loves to play, not just teenagers. The game can present in different ways. For example, as part of a campaign to promote a language school, we developed a Rich Media creative. The character needs the user’s help with answering his English questions and thus achieving the goal.

There are several different mechanics within the game. One of them is “catch”, when flying objects appear on the screen (from bottom to top or chaotically), and the user must catch them with the help of clicks or a slide on the screen. As, for example, in an advertising campaign for the same language school.

It is a subset of game mechanics like a hidden object game in a photo. The user plays, and the subject can be the advertised product or something that matches the theme. So, for example, as part of advertising creative for a jewelry store, the user was offered to search for the jewelry itself.

Game-based mechanics. Ads creative can be implemented as a game puzzle, for example, to put the parts of the picture of a product together.

Using this mechanic, we ask the user to find two identical packages, flavors, etc. It is also a variation of the game.

Simulating a game in the form of a labyrinth is another possibility of implementing gamification.

Do you know this popular version of “fortune-telling” launched by bloggers on social networks? Take a screenshot of the picture and determine what awaits you. “Stop” is a similar mechanic. You need to click on the screen among the rapidly changing goods; the one you clicked on comes displayed on the screen. See how it works.

Do you want the user to see different options for a product/service depending on the time of day? We can do it using dynamic time mechanics. For example, here, they offer to try Starbucks coffee drinks in the morning hours, which are relevant precisely for the first half of the day! Perhaps you will see others following the link. It depends on what time you are reading this article.

Here, it seems like everything is straightforward; depending on the specifics of the product and the purpose of the advertisement, you can create an effect of urgency, including a timer in the advertising creative.

Want to drive user engagement to physical stores? In this case, you need to set up geotargeting to the audience that is nearby (or in the same city) and use an advertising creative with the ability to get directions by clicking on this button. The user will go to the Maps, where the preloaded store locations. He will only have to choose his spot.

With the built-in version of the calculator, you can achieve high user engagement.

Contact us right now if you want to attract a mobile target audience and be remembered by the users. It is possible with Rich Media advertising.